In 2016, at age 25, I received the diagnosis of sporadic medullary thyroid cancer (MTC). And here I am today, honored to write this column and share some of the views and experiences patients with MTC live with every day. My experiences reflect many of the frustrations we encounter and would like our medical team to be aware of.

In this, my debut column, I would like to introduce myself and address the topics, issues and experiences I’ll be addressing. Perhaps some of my upbringing and life experiences will ring a bell for physicians, especially when they meet patients with similarities in their own history. Maybe it will spark some other ideas even in regard to research and development of treatments for MTC.

MTC often seems random, so I am uncertain what areas of similarities between patients’ childhoods and life experiences exist until the fateful day, when the words, “you have Medullary Thyroid Cancer,” are spoken. At that point, our lives become riddled with parallels.The day when suddenly we realize how much we have in common.

I was born in 1990 in a small west German town, a couple of hours from the French border,  with a population of about 32,000. My childhood was fairly uneventful. I have 2 younger sisters, who are healthy and not affected by MTC,and neither are my parents or anyone else in my extended family.

My family heritage is a bit complicated. My ancestors are originally from the German region. However, in the 18th century, they moved to Russia under Catherine the Great. That is where both of my parents were born before moving back to Germany in 1976 and 1987.

When talking to my mom, she would say that until I was around 2 or 3, I was often sickly. However, after that I was a fairly healthy child, though I had whooping cough, measles and chicken pox. All of which I had before I was old enough to receive the corresponding vaccines. I was exposed to the viruses in my pediatrician’s waiting room. I spent my first birthday in the hospital due to teething and a potential salmonella poisoning.

After the first couple of years, my health improved and I don’t remember being sick much after that. Just the regular colds and flus every once in a while, but nothing else really.

There is no family history of thyroid cancer or even major thyroid issues in my family. My father dealt with a mild case of hypothyroidism, which is the extent of the thyroid history in my family. There is, however,  some history of cancer. Mostly along the lines of breast and ovarian cancer.

Most of the deaths in my family have been related to strokes, heart attacks and old age, with some rare cases of cancer being the cause. However, as I said before, it was non-thyroid related cancers.

After the MTC diagnosis

My husband and I got married in 2012 and about 2 years after our wedding, my symptoms started to increase. It got to the point where they were noticeable in everyday life. (I will go into more detail in the next few columns about exactly what those symptoms looked like). I had  some symptoms that surfaced probably in late puberty. They didn’t affect my daily life. They only became noticeable about a year or so before I got married. The pieces never came together until after the diagnosis.

I have now lived with MTC for 5 years. My 5-year cancerversary was on May 31, 2021. In those 5 years I have had 2 major neck surgeries and 30 radiation treatments. I have had many, many, different procedures to deal with the side effects of the radiation. I have lost track of the number of scans, blood draws and doctor  visits I have had over the course of 5 years.

In all that time, I have been able to learn how to not only live with MTC but thrive. About 8 months ago, I gave birth to our first child, a son. He is completely healthy and flourishing. He has brought a lot of joy into our life. Much more than cancer was ever able to take away from us.

Living with cancer has its ups and downs, but I have learned to deal with them as they arise. Sometimes it’s easier than other times. My family and I have learned a lot about cancer, ourselves, life in general and about living with a chronic disease. 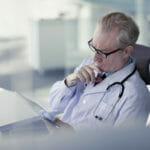