Thirty-one years ago I was born a healthy 6-pound baby. My delivery went well with no complications during birth and no issues with my health whatsoever. I was actually a pretty healthy kid, though a little chubby as a toddler. It wasn’t until I turned 13 that I dramatically started to thin down. You could literally see the difference in a picture of when I was 12 years old compared to an image of me at 13 years of age.

You can be diagnosed with late-onset Pompe disease as early as 12 years old. I was diagnosed at 13. I had just started middle school and my body was already beginning to go through the natural changes that happen through puberty. It felt like my body was growing backward. I was becoming slower and weaker, and my body was getting thinner.

I remember going to the doctor before my diagnosis and the doctor saying that I was developing slower than the other kids, whatever that meant at that time, but they put me on PediaSure.

Middle school was the beginning of Pompe disease for me; it was then that everything started changing. I just started feeling different. But it was in high school when you could look at me and see that something was wrong. I was 52 pounds and in a wheelchair. And I’m not exactly a short person so I definitely had a skeleton-like body. It was normal to me but others were judging me differently.

Being in a wheelchair was one thing but being seriously thin was another. Let’s not forget being incredibly thin screams sicknesses to the world. But was I sick? Was I malnourished? I ate normal meals but I just couldn’t gain weight. So what do doctors do with their underweight patients? Of course, they put us on nutritious shakes that are meant to gain and maintain a healthy weight.

I also had a gastrostomy tube in high school but for some reason, my body kept rejecting the tube. It kept falling out. Also, I want to point out that a normal healthy body has clear muscle tone. Even healthy slim people have muscles that make them look healthy. When you have Pompe disease you don’t have muscles to show so being thin meant being frail and bony.

However, this doesn’t apply to everyone with Pompe. If you were diagnosed before or around puberty, being underweight was definitely a struggle. And it’s a struggle gaining weight. I will admit sticking with nutritional shakes definitely helps with weight gain. I didn’t start to actually gain weight until I started treatment. When my infusions began giving me strength it made me strong enough to eat more. I even started swallowing food much easier. Then after a few years of treatment, I returned to drinking shakes and that helped me gain weight.

After I had my surgery last year I lost a few pounds and the protein shakes helped me get my weight back. Because our bodies are different, our weight will also be different. But Pompe disease will always be a factor and that’s why diet plays a major role in treatment. 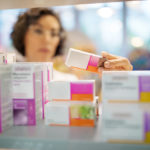 What Others Don’t Know About Living With Pompe Disease