As you may imagine, having a baby is often a distant thought for someone diagnosed with cancer. Most of the time the only constant thought is survival, making it through the next day. When I was diagnosed with medullary thyroid cancer (MTC), my dreams of having a child faded, along with other hopes and dreams I had for my life, even though I was just 25 years old.

I had been married for almost 4 years at that point. My husband and I had talked about wanting to start a family. Since my symptoms were increasing, that was put on the back burner until we could figure out what was going on.

Many cancer patients are diagnosed much later in life, often after they have children, which comes with its own anxieties, fears, and obstacles. For me, after my diagnosis, I started hoping and praying that maybe one day I would be well enough to have a child.

Since there are so few of us who even consider pregnancy after diagnosis, there is basically no research on it. In fact, I learned there isn’t a whole lot of research on MTC overall, especially when compared to other cancers, such as breast cancer.

While we were debating if having a child was even a possibility, we consulted many doctors. Their advice ran the gamut from: “Yes, you can try to have a child,” to “Maybe you should wait until we have a bit more information on how your cancer behaves,” to “Children are not in your future.”

This would be a decision that would have to be carefully weighed and made. We waited 4 years until we decided to take the plunge and try for a baby. By that time, I had been followed closely, with many scans and more blood tests than I could count. These measures included genetic testing to ensure my cancer was not the hereditary type associated with the MEN2B mutation.

All of it seemed to show my cancer was stable. Scans hadn’t changed much for over a year and both CEA and calcitonin were stable. All signs suggested the time was right to start trying.

Eight months and a miscarriage later, we were finally pregnant with our rainbow baby. My pregnancy was quite eventful, but not so much on the cancer side. I received another diagnosis of subchorionic hematomas, which turned into subchorionic hemorrhages. This led to being on some sort of bed rest for most of my pregnancy.

I had multiple blood draws throughout the pregnancy to keep monitoring cancer progression. To everyone’s surprise, both CEA and calcitonin dropped. The CEA  dropped to its lowest level since we started following it.

We were so perplexed by these developments, I started to joke that maybe I needed to be constantly pregnant to prevent the cancer from winning.

However, once I gave birth, that quickly changed.

Two months postpartum, I had another blood test done. These numbers were, simply put, scary. My calcitonin had more than doubled from around 1700 to over 3500 in just 4 months. My CEA was also back on the rise.

As a new mother, these numbers were terrifying. I asked myself: Was I being selfish in having a child and now leaving him motherless at a very young age?

There were again experiences that showed blood markers increasing during pregnancy and staying elevated, meaning new tumor growth. Others shared theories with me that their doctors entertained.

I tend to believe those theories. One doctor followed a patient through a few pregnancies and concluded the increased blood volume during pregnancy causes more blood to flow through tumors. Therefore, it “picks up” more calcitonin and CEA on its way. After birth, when the blood volume decreases again, the concentration of these is much higher than before.

Why do I tend to believe this theory? My son is now 11 months old. In that time, I have had multiple blood draws as well as scans, both gallium and CT with contrast scans.

At the beginning of this journey, my doctor suggested that the increase in numbers could mean new tumor growth in the next few months. Instead, my scans remained stable. They are virtually the same that they have been since May 2019, before we even started trying.

CEA and calcitonin also have continued to drop drastically; CEA slower than calcitonin, but still incredible to watch. My calcitonin is currently back to prepregnancy levels of around 1600.

No new tumors have shown up. The ones that my team and I have been watching are unchanged. It truly has been amazing.

As I have said multiple times in this column, I wish there was more testing and research done when it comes to MTC and pregnancy.

Having that research may allow others to make the decision to not quite give up on their dream of a family, which includes children. It may allow young patients like me to have hope they can become pregnant, and give them hope that cancer doesn’t always get the last word. 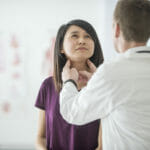 How Do You Tell Your Patients They Have Medullary Thyroid Cancer?