As most medical professionals know, being diagnosed with medullary thyroid carcinoma (MTC) likely means one loses his or her thyroid.

Growing up, I never gave much stock to the thyroid. In most cases when I heard about people with cancer, it would be cancers such as papillary and follicular — you know, the easy ones. However, I quickly learned there is no such thing as an “easy” cancer.

It wasn’t until I got the news that I had a nodule that needed to be biopsied, that the gravity of thyroid issues started to set in. Even then, there was still so much more I needed to learn and understand, most of which I wouldn’t come to fully understand until the first year without my thyroid.

Almost immediately after my surgery, I was placed on Synthroid. It was explained to me that I would have to have bloodwork done within a few weeks to see if the dosing needed to be changed. Within the first 24 hours, I developed some numbness and tingling in my arms and legs. I found out that not only did the surgeon need to remove my thyroid but also one of my parathyroids.

This was a little bit of a surprise to me — not just the fact that I had to lose a parathyroid, but also the effect it had on me. It was an easily rectifiable issue for me, though. After just a single dose of calcium, the symptoms subsided and never returned.

Losing my thyroid did not have an immediate effect on me. However, once it did, I was not prepared for it.

I was completely unaware of just how difficult of a chase it would be to manage my thyroid levels for the rest of my life. The first year was probably the hardest. Within the first few months, my levels went as high as 15 mIU/L. I did not feel well at all. There were so many different symptoms I was experiencing that I couldn’t pinpoint them at first until I finally got my blood levels checked.

The fatigue, sweatiness, heart palpitations, insomnia, and other symptoms made life even more difficult, on top of dealing with cancer. Over the last 6 years, I have lost count of how many times my dosages have changed.

At one point in time, I had every dose from 112mcg to 150mcg of Synthroid in my bathroom cabinet. It wasn’t until I got referred to an endocrinologist in 2019 (3 years after my diagnosis) that my levels seemed to be more stable and stayed that way as well.

Before I saw the endocrinologist, I often had to ask to get my levels checked by my general practitioner. I also would have to follow up with him on the results and asks for changes to my medication.

Another change my doctor made was that she put me on a 125mcg dose and adjusted my intake from there. Instead of constantly changing my dose by giving me a different pill strength, she would have me skip a dose every week or add a second pill once a week.

This approach has been so much easier for me. I believe it would also be helpful for other people. When I joined a Facebook support group, one of the themes I came across was that patients had to fight to get approval from their insurance companies to be able to get brand-name Synthroid vs generic, or sometimes any thyroid medication for that matter.

Now, imagine these patients having to go through this whole approval process every single time their dose changes, which as I mentioned happens a lot, especially during the first year. It is hard enough to go between hyperthyroidism and hypothyroidism, constantly feeling unwell and then also having to fight to get the correct and best treatments.

This “chase” of an adequate level, as I call it, is sometimes as much of a mind game as is it a physical challenge. MTC patients rely on medical professionals to make sure these levels are carefully monitored. It would be so helpful if medical professionals would not only be proactive in managing thyroid levels but also help patients juggle insurance issues. 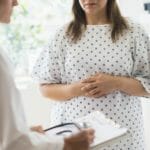 Making the Decision to Start a Family, Despite MTC