I rolled across the finish line wearing a sleeveless neon green jersey. This was a familiar experience I had for many summers. As a Duchenne muscular dystrophy (DMD) patient, from about age 11 through 26, it was an annual tradition for me to enter 5Ks during the warmer months. I’d floor my power wheelchair joystick and navigate the assigned route.

Don’t worry, I had a good seat belt. My times were somewhat mediocre, but I was just in it for the fun and friendships I made.

That jersey I mentioned spelled out the words “Team Momentum,” which is the name for the charity running group formed by the Muscular Dystrophy Association (MDA) in 2014.

Recently I spoke to Amy Shinneman, who is MDA’s 2022 National Ambassador. Her role is to spread awareness for the nonprofit through a variety of channels. One way she does this is by sharing her story of living with a form of muscular dystrophy called Bethlem myopathy. The condition is characterized by slowly progressing muscle weakness and stiff joints.

It wasn’t until 2018, at the age of 44, that Shinneman was diagnosed through genetic testing, though she had symptoms growing up. Prior to becoming aware of her condition she had been a counselor for MDA’s summer camp during high school. She explained how Team Momentum is incorporated with the charity.

“The mission (of Team Momentum) is to raise money to help support all that MDA is doing as far as their care centers, resource centers, summer camp, and of course the research innovations. It’s like another branch,” Shinneman said.

This mission is often accomplished through fundraising efforts ahead of races that Team Momentum members enter. Notable events include the New York City Marathon, Boston Marathon, and the Trans New Hampshire Bike Ride.

Shinneman discovered Team Momentum in 2019. Her husband Jamie was set to run the Boston Marathon that April. They found out he could represent the group in his race.

“I just happened to be scrolling through Facebook, and Team Momentum popped up. So I started researching it,” she said. “There were about 2 weeks before the Boston Marathon. We contacted the national director at the time, and Jamie was able to join.

“We were able to raise some money in that short amount of time.”

Over the last few years, Shinneman has participated in her own events. These were the 2019 Chicago Marathon and the 2021 New York City Marathon contested in November. She did the races with a racing wheelchair called a duo-bike, which was pushed by her husband. The bike had been loaned to them by MDA.

In the midst of those marathons, Shinneman says there were supporters cheering her on that stood out.

“We both noticed that there would be people along the way that might have a disability. We’d give them a smile and a wave and could just kind of tell that they’re looking like, ‘Oh yeah, maybe I could do that too,’” she said. “We want to help encourage others that they can participate in things like that in different ways.”

Another perk that running charity races can provide is a sense of comradery in a shared objective. That’s something Shinneman observed with Team Momentum.

“I got to meet a lot of teammates that I hadn’t met. It’s cool to have that feeling of everybody working towards the same goal of empowering people that live with muscular dystrophy, ALS, and related neuromuscular diseases,” she said. “Growing up I wasn’t really on any athletic teams. Being connected like that and feeling included was really special for me.”

Aside from the 2 marathons, Shinneman completed, she organized a different kind of MDA fundraiser called a muscle walk last year. There was a surprise appearance by Indianapolis Colts running back Nyheim Hines, who was an MDA ambassador in 2021. Muscle walks are held across the country.

Information about joining Team Momentum, its upcoming events, and muscle walks can all be found at mda.org. To learn more about Shinneman’s story check out her blog at https://humblycourageous.blogspot.com/. 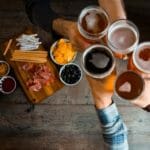 See Me, the Person, Not Me in My Wheelchair