When I was pregnant, my husband and I had no idea our babies would receive diagnoses of Alagille syndrome (ALGS). During my pregnancy with my second daughter, we were given some news that was upsetting to me and my husband.  We were told they found an echogenic intracardiac foci (EIF) on her heart. We had no clue what this meant, but they were very good at explaining and showing us the bright spot they found.

Of course, hearing this news was greatly upsetting. They made sure to tell us that the echogenic focus would not affect the function of the heart in any way and that outside of the bright spot, her heart looked great. They even explained that usually it is thought to be a calcium deposit and goes away.

However, they also told us it could be nothing or it could potentially be a marker for Down Syndrome. This was the only sign we had to link to Down Syndrome, so they were pretty sure it was not that, but we were not able to be sure until I gave birth.

I was very upset with this news because I did not know what to expect or if something would be wrong with my baby. Toward the end of my pregnancy, I ended up being monitored as a high-risk pregnancy in my third trimester because the baby was small. The echogenic focus went away with later ultrasounds, and she was born a very healthy and happy baby.

Read about HCP resources for ALGS

Once I was pregnant with my son, we found out at his second-trimester anatomy screening that he also had an echogenic intracardiac foci on his ventricle. I was not as concerned this time around considering we had also experienced this with my daughter, and all was fine.  At the time we also did not know yet that he would be born with ALGS. There were never any other intrauterine signs of concern.

When I think back to my pregnancies, all 3 of my Alagille kiddos had an echogenic focus that was found during their second-trimester anatomy scan. I have always wondered if this was just a coincidence or something that was there because of their ALGS condition. They each have very minor heart involvement with their diagnosis.

They each have a very mild pulmonary stenosis, and my youngest son has bilateral pulmonary stenosis that is improving over time.  None of them have needed intervention and are followed yearly by cardiologists. However, this was the only factor detected during my pregnancies besides 1 baby being underweight in utero.

I think it would be great if more research could be done about findings during pregnancy that could potentially link to ALGS. I’m sure all these data are tracked somewhere, but I do not specifically recall discussing the EIF with anyone in relation to ALGS. I wonder if there would ever be a way to put intrauterine signs and findings together to suggest that the baby may have ALGS, especially if one of the parents also has ALGS. 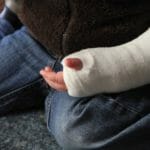 Coping With Breaks and Fractures While Managing ALGS