After my son was diagnosed with Alagille syndrome (ALGS), we learned a lot of information and started to become very familiar with the basics of the disease. We learned that ALGS can be an inherited gene from a parent, or it can be a random mutation. After learning several characteristics of ALGS, we thought it would be best for our family to undergo genetic testing. Thinking over our family one by one I started to link Alagille Syndrome and our family members.

My pregnancy with my second daughter was an easy-going and healthy pregnancy until about 35 weeks. My OBGYN wanted me to have a growth scan completed because I was measuring behind where I should be for that stage of pregnancy. During the growth scan, it was found that my daughter was extremely underweight and that prompted concern. It was decided that it would be best for me to deliver at 37 weeks in case there was a problem and bring my baby to the outside world where we could better care for her. During the next few days, I underwent several growth scans and nonstress tests.

Read more about the etiology of ALGS

When my daughter was born, she weighed just 5 lbs, 1 oz.  When we were released from the hospital she weighed a whopping 4lbs and 11oz.  She was a tiny, but a healthy, little girl. They made sure to test the placenta afterward for things like intrauterine growth restriction (IUGR) and everything came back normal. They had no concrete reasons for her being so tiny; it was chalked up to the fact that she was just a tiny baby because her dad was tiny. She was and is still always measuring on the lowest end of the growth chart around the 0.5 to 1 percentile.

After we got the diagnosis of ALGS for my son, I started to think back to when my daughter was an infant. She would cry often for no reason that we could figure out. Now, I believe she was so cranky because she was so uncomfortable in her skin. She would scratch the inside of her ears until they bled. She would scratch all over her body, but the main points of itch were her ears and feet. During car rides, she would take off her socks and shoes and just tear apart her feet.

When I took her for a wellness visit, I mentioned her scratching her ears open until they bled, and the pediatrician said she had eczema. Anytime I would lay her down to change her diaper, she would rub her back on the floor to itch herself. She had a habit of pulling her shirt up over her stomach and using her shirt to scratch her stomach. As she got older, she mostly outgrew this habit but sometimes I will catch her still doing it. She would never sleep at night. She was always waking up, even when she was 2 years old, to the point that I thought it was her mattress, so I bought her a brand new, quieter mattress to try to combat the issue. Now that I have more knowledge, I think her itch was keeping her awake.

After piecing some things together, like her small stature, itching, and her facial characteristics (a broad forehead, eyes spaced far apart, and a pointed chin), I figured she likely had ALGS. That meant that it had to be inherited from my husband or myself. Neither my husband nor I had any known medical issues. Everyone in our immediate families was also healthy and never had any concerns with anything related to ALGS. However, my husband is a tinier-statured guy. He has always had trouble gaining weight, even when he would try a high-calorie diet loaded with protein. He also has ALGS facial characteristics, which led me to believe that he also had ALGS.  Now all that was left to do was for us to complete genetic testing to confirm the diagnosis. 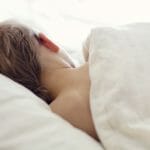 Preparing to Care for My Son After His Alagille Syndrome Diagnosis