When my son’s Alagille syndrome (ALGS) diagnosis was confirmed, I knew liver concerns would be a priority. I also knew that evaluating medications as they were developed would become a pervasive pastime.

As new symptoms arise, medications to treat ALGS change, are replaced or are modified. Because my son primarily had liver issues, concerns about weight gain, and proper vitamin absorption, he began his treatment on ursodiol, AquADEKS, and vitamin D. The medications were ordered from the pharmacy and came in liquid form because he was a 2-month-old baby.

At first, everything was promising with both obtaining medication and having the treatments covered by our health insurance. The only issue I had was traveling to different pharmacies for medications. The chain pharmacy we used could supply 2 of the medications, but the ursodiol needed to be picked up across town at a compounding pharmacy.

My son’s ursodiol was compounded because he was an infant. He was not able to swallow the pill form, which would have been covered at a low copay of $3 a month. I also was advised the vitamins were not covered because vitamins are not “essential medications” and often are supplemental. At this point, I was paying over $350 a month for medications. I was lucky enough for an insurance company representative to help me find a discount coupon for the ursodiol to drop the price, but it was still a large amount coming out of pocket each month.

I filed a dispute with the insurance commissioner and they investigated the denials. They found the insurance plan stated all compounds and vitamins were excluded so there was nothing they could do. I spent hours on the phone with the insurance company, having our team write and send appeals and reasons why we needed the coverage with no win to celebrate. I cried every time I picked up and paid for the medications. I did not cry because of the cost, but because of the frustration with the situation.

I was thankful my family was able to afford the medications out of pocket but could not understand why a child who was in need was not receiving help. A child who could suffer without these medications. We were trying to treat my son and hopefully prevent him from needing a liver transplant. What if my family was not able to afford them out of pocket?

After several months, our team suggested my son try Pregestimil formula. Of course, the insurance company would not cover it. There were a handful of specific reasons they would cover it and ALGS was not one of them. The cost of the formula was outrageous and not something I could see myself being able to maintain for months on top of the medication costs.

We were able to reach out to the formula company and obtain a small discount, which helped.  My son ended up not being able to take the formula because it made him very sick when he would drink it, so we were able to cut that cost out.

Ultimately, we ended up learning our state has a program for sick and disabled kids that we applied to. We submitted all the paperwork about ALGS, what the future may look like, his monthly needs, and a lot of other information. We were fortunate enough that the state program accepted our son. Whatever costs our primary insurance does not cover, they will cover for us. The program has been a godsend for us as our primary insurance company lacks the coverage that we need. It is very disheartening that several families with kids needing medical help do not receive the coverage they need, therefore putting families into financial and emotional strain.

Hopefully, one day soon, insurance companies will change the way they do business and help those who truly need it. 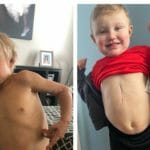 Every Day Is Rare Disease Day for My Family