I have a rather large family and we have unique ways of relating to each other. Because of this, I often consider whether talking about alpha-1 antitrypsin deficiency (AATD) is a good idea before I open my mouth. This can frequently be very confusing.

Not only can AATD be very complicated, but my health as a whole is complex. The family dynamic is complicated. I am guessing I am not the only person who has AATD who struggles to communicate with their family about it. Granted, they are very loving and kind, but explaining AATD always takes a while.

Growing up, we saw each other as parts of a whole. Therefore, what one does has an effect on the rest of the family. When I was young, we were generally very respectful of each other. Our parents showed us that mutual respect is how we would best live together. They didn’t really teach it with their words as much as by their actions.

As we grew up, changed, and went our separate ways, the way we interacted with each other stayed intact. So, we still like to help each other in the best way we can. Since that comes naturally, we prefer each other to be somewhat independent.

Because I have unpredictable lung issues, I try to remember a few things. First, my family cares about me very much. Any words they share come from good intentions, and those they don’t share are probably held back with good intentions.

Why do I hesitate to communicate with family, who care about me the most? If anyone is not careful, they can act in a demanding manner. Everyone, absolutely everyone, has a limit. In my case, they would be the ones to take care of me if I was on disability. This gives me a reason to be as independent of them now as possible. I don’t want to be seen as someone who is dependent on others very consistently.

On the flip side, it is important to communicate with them about what I’m going through. They are a big enough part of my life that I want them to know the facts. So, you can see how I must be careful to be honest, but not complain.

If I did live with a family member, they may need to know if I wasn’t feeling well. They may not want to be around me if I’m contagious. And if I have an exacerbation and I am later getting back than I expected, they would like to know if I’m doing well.

If I had an asthma attack today, I wouldn’t tell anyone unless I needed to. But if I had COVID-19 or an exacerbation that lasted for a long time, I would. Each of my actions would cause them to be concerned, so I would not be careless with that.

Thankfully, if they took me in, my health status won’t be a surprise. But something I have learned is there is a fine line between being honest and complaining. I never really thought of myself as negative growing up. It’s something I can struggle with at times, and although it’s understandable to be sad sometimes, negative thoughts can create a toxic environment.

But, I wouldn’t trade my family life for anything else. Between trying not to worry myself and my family, I have to be very responsible. Sometimes they do worry about me, and knowing they care makes a huge difference.

It’s probably one of the reasons I am doing well. I’m happy I had my life, so I could learn to do the hard things during hard times. I am still learning and growing as a person, I just want to learn from both my past and my future.

Not everyone can say that. Many people have family members who are gone or not speaking with them. Perhaps sometimes we must not speak with them because of the danger they pose.

Hopefully, I will keep learning. Knowing how to communicate with them about this has taken a long time. I didn’t always do it right, but it’s good to know I’ve found a way to be honest without being demanding. 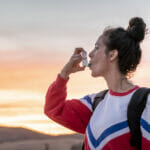 Weighing the Pros and Cons of AATD Patients Using Inhalers