A large, national multicenter registry of Spanish patients with Wilson disease (WD) showed significant heterogeneity in diagnostic methods and treatment tools utilized between centers, according to an article published in Gastroenterología y Hepatología.

Noninvasive diagnostic laboratory parameters yielded discordant results in 39.8% of the cases followed in the study. Ceruloplasmin levels were decreased in 91.8% of patients, but cupruria was found to be greater than 100 mcg per 24 hours in only 59.6% of patients.

The study found that 93.3% of patients diagnosed prior to 2000 had liver biopsy performed to quantify copper levels but that this number dropped to only 80.3% in more recent years (P =.029). These results indicate a potential shift to more noninvasive diagnostic methods.

Only about half of the patients in the registry (56.6%) had genetic testing performed, however, WD mutations were discovered in 83.9% of these patients. The Leipzig score was calculated retrospectively using registry data and showed that 92.5% of patients had scores of 4 or greater, indicating an established WD diagnosis.

“Significant heterogeneity in diagnosis and management of WD patients emerges from this multicenter study that includes both small and large reference centers. The incorporation of genetic testing will likely improve diagnosis,” the authors said.

The most commonly prescribed therapies in the registry were D-penicillamine (DP) and zinc salts (Zn) which were used as monotherapy in 75.2% and 18.4% of patients, respectively. Trientine was used only rarely (3.5%). Zinc monotherapy was seldom used in patients with cirrhosis (P =.025).

A total of 153 patients were included in the study from 31 different medical centers in Spain. There was a slight majority of men in the study population (58%) with a median age of 20.6 years and a median follow-up period of 15.5 years since diagnosis. Most cases presented with hepatic symptoms (69.1%), neurological (8.6%), and mixed (11.2%) being less common. Diagnosis was done through family screening in 11.2% of patients. 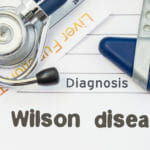 Diagnosis and Management of Wilson Disease Differ Between Centers in Spain