Researchers presented a case series of 11 patients with spinal muscular atrophy (SMA) who were not related and had milder phenotypes. All 11 patients carried the c.859G>C-positive modifier variant in the SMN2 gene.

“The deep molecular characterization of SMN2 in our cohort highlights the importance of testing c.859G>C, as well as accurately assessing the SMN2 region in SMA patients to gain insight into the complex genotype-phenotype correlations and improve prognostic outcomes,” the researchers wrote.

The SMN2 gene is the main phenotypic modifier of SMA as its copy number directly influences the amount of SMN protein being made.

Here, a team of researchers led by Eduardo F. Tizzano, MD, PhD, from the Autonomous University of Barcelona in Catalonia, Spain, used a next-generation sequencing method to better characterize the entire SMN region in 11 SMA patients with milder phenotypes and the c.859G>C-positive modifier variant in SMN2.

Read more about the etiology of SMA

“Analysis of two homozygous cases for the variant allowed us to identify a specific haplotype, Smn2-859C.1, in association with c.859G>C,” the researchers wrote.

They also identified a second haplotype present in 2 other patients, the Smn2-859C.2 haplotype, as well as a novel variant in intron 2a that had never been reported and was exclusively linked to the Smn2-859C.1 haplotype. According to the authors, this finding further suggests that “this region has been ancestrally conserved.”

The study is published in the International Journal of Molecular Sciences.

The SMN2 gene is almost identical to the SMN1 gene, which codes for the SMN protein that is essential for the health and survival of motor neurons. SMA is caused by biallelic loss or pathogenic variants in the SMN1 gene leading to the degeneration of alpha motor neurons in the anterior horn of the spinal cord. 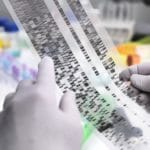