A case has been reported of complete clearance of bone marrow mast cells and the associated hematologic neoplasm (AHN) in a patient with systemic mastocytosis (SM) after administration of a hypomethylating agent and venetoclax (HMA-VEN).

The report, published in the European Journal of Haematology, highlights the potentially curative activity of HMA-VEN in this disease.

“The combination of hypomethylating agent with venetoclax achieves complete remissions in about two thirds of newly diagnosed acute myeloid leukemia cases,” the authors wrote. “Given the potential of HMA-VEN to target both the myeloid neoplasm and mast cell infiltrate, we evaluated the response to this combination therapy in a patient with SM-myelodysplastic syndrome.”

The patient was a 42-year-old man with fatigue and pancytopenia. He was currently in remission from primary mediastinal diffuse large B-cell lymphoma for 4 years. A bone marrow biopsy revealed myelodysplastic syndrome with mast cell clusters, and genetic analyses showed a KIT D816V mutation, leading to a diagnosis of SM-AMN with myelodysplastic syndrome.

Treatment with HMA with erythropoietin-stimulating agents initiated no response and his pancytopenia worsened. He was found to be intolerant of midostaurin, and his condition progressed to acute myeloid leukemia.

Subsequent treatment with hydroxyurea followed by decitabine and venetoclax led to a complete remission of the leukemia and clearance of mast cell infiltrate in the bone marrow after just 1 therapy cycle. He received a second cycle of HMA + VEN followed by donor alloHSCT 1 month later, and the next bone marrow biopsy on day 30 revealed normal hematopoiesis without mast cell infiltrate. Nine months later, he continues to be in complete remission.

In addition to the rapid response, the treatment regimen was well tolerated by the patient. The authors recommend further study of HMA-VEN as a first-line treatment for SM-AHN. 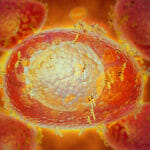