In a recent issue of Cell & Bioscience, Kyung‑Yil Lee, MD, PhD, professor at the Catholic University of Korea College of Medicine, Republic of Korea, proposed a common immunopathogenesis for diseases of the central nervous system (CNS). “I believe that the etiological substances, the focus of them, the target cells, and corresponding immune components in each CNS disease would be defined in the future, and proper diagnosing, treatment, and prevention modalities for the diseases will be developed,” he said. “I hope that this article helps researchers solve the remaining puzzles about the etiology, pathophysiology, and treatment of CNS diseases.”

According to the PHS hypothesis, living organisms have a system that controls all biological activity, including immune reactions. Every disease involves etiological or triggering substances for disease onset and the main function of the host’s immune system is to control those substances according to their size and biochemical properties and to compensate for protein deficiencies, thereby protecting cells and, ultimately, the host.

Mast cells, the cells underlying disease in SM, are major components of the neuroimmune system that are triggered by infections, allergic reactions, and anaphylaxis. When activated, they promote the synthesis and/or release of hundreds of mediators such as biogenic amines (eg, histamine), proteases (eg, tryptase), cytokines, eicosanoids, heparin, and growth factors. The etiological substances triggering mast cell activation can differ between pathological conditions, but at least some mediators could underlie the clinical manifestations of diseases.

For instance, patients with SM have increased levels of tryptase, histamine, and other mast cell mediators, which usually manifests as flushing, pruritus, and a higher risk of anaphylaxis.

Amyloidosis-related disorders, such as hATTR, are characterized by the infiltration of amyloid proteins, which are considered primary immune effectors or supporting proteins for controlling etiological or toxic substances in light of the PHS hypothesis. Initial pathological lesions in amyloidosis-related disorders are not accompanied by adaptive immune reactions. Therefore, the etiological substances involved must be very small and controlled by the innate immune system, which is composed of undefined immune proteins or peptides at early stages, as explained by the PHS hypothesis.

The fact that amyloidogenic aggregate structure and properties are similar across distinct pathological conditions that manifest differently suggests a common immunopathogenesis. 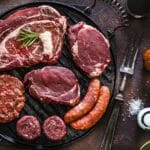