A new case of infantile aggressive systemic mastocytosis (SM) treated with midostaurin has been reported. The case, published in the Annals of Allergy, Asthma, & Immunology, noted the therapy improved the patient’s clinical symptoms without significant adverse events.

“To our knowledge this is the second case of infantile systemic mastocytosis where oral midostaurin rapidly decreased serum tryptase and improved clinical symptoms without notable adverse effects,” the authors wrote. “This treatment will be continued until normalization of serum tryptase unless adverse effects develop.”

The patient was a 3-month-old boy with diffuse pruritic patches and hepatosplenomegaly. His tryptase levels were significantly elevated at 187 ng/mL, and a bone marrow biopsy revealed multifocal mast cell infiltration. A proportion of the mast cells were spindle shaped.

Immunostaining of the mast cells was positive for tryptase, CD117, CD2, and CD30, and a biopsy of the skin revealed mast cell infiltration in the dermis. He had no cytopenias. Genetic analyses showed he had a KIT816V mutation.

Midostaurin is a cytoreductive multikinase inhibitor approved for use in adult SM. The authors sought and obtained emergency approval to administer midostaurin orally to this patient at 30 mg/m2 every 12 hours.

The treatment was rapidly effective. Within 3 weeks of its initiation, the patient’s tryptase level was down to 129 ng/mL the skin lesions on his head and neck nearly completely resolved, and his hepatosplenomegaly was reduced as well. 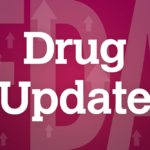