Employing Tc-99m hydroxyl diphosphonate (HDP) bone scintigraphy can be useful in diagnosing systemic mastocytosis (SM), according to a case report published in the International Journal of Paediatric Orthopaedics. The researchers observed diffuse skeletal uptake on the bone scan, and a bone biopsy revealed mast cell infiltration.

“Diagnosing [SM] remains challenging due to the contradictory results of available imaging modalities,” the authors wrote. “Due to the latent course of the illness, the diagnosis of bone marrow infiltration may be delayed or initially misdiagnosed. We report a case illustrating the role of HDP bone scintigraphy to facilitate early diagnosis in [SM].”

The case involved a 4-year old girl who presented with pain in the right thigh and intermittent fever over a period of 2 months. Radiographs showed nothing remarkable, but she soon developed a fever and blood studies suggesting infection.

Based on these findings, a bone biopsy was performed, which revealed mast cell infiltration in the marrow, confirming the patient had SM. Despite treatment with corticosteroids, she continued to worsen and a bone marrow trephine biopsy found a nonhematopoietic malignancy infiltrating the bone marrow. Chemotherapy was started but the patient died due to disease progression.

The authors recommend bone scintigraphy as a useful, noninvasive and sensitive approach that can facilitate early diagnosis of SM, particularly in pediatric patients. 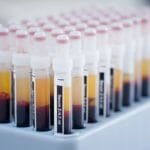