Researchers reported the case of a patient who had acute mast cell leukemia preceded by a malignant mediastinal germ cell tumor and published their findings in Cancer Management and Research.

Systemic mastocytosis (SM) occurs when mast cells invade the bone marrow as well as other organs in the body. Mast cell leukemia is a subtype of SM. It is exceedingly rare, accounting for only 0.5% of SM cases. Germ cell tumors are common among young adult males. Most patients respond well to chemotherapy.

The case study details an adult man who presented with a painful mass in the anterior mediastinum. Alpha-fetoprotein (AFP) and human chorionic gonadotropin (β-hCG) levels were elevated.

The patient underwent surgery to have the growth removed. The lesion was histopathologically identified as a malignant germ cell tumor. After surgery, the patient recovered well and both AFP and β-hCG levels decreased. He was then started on chemotherapy and radiotherapy.

Four years later, the patient returned with a recurrence of the germ cell tumor with a metastatic lesion on the lower lobe of the left lung, which was removed via pneumoresection. Pathological studies revealed the lesion to be a single immature teratoma. He underwent chemotherapy and remained in remission.

“Positron emission tomography/computed tomography (PET/CT) detected a diffuse increase in systemic bone metabolism and hepatosplenomegaly with slightly increased [F-fluorodeoxyglucose] metabolism, which was consistent with the manifestation of blood system diseases,” the authors wrote.

After 2 weeks on dexamethasone, the patient’s anemia and thrombocytopenia improved significantly. A diagnosis of mast cell leukemia was confirmed, and he was transferred to another hospital for subsequent care. The patient eventually died of acute respiratory distress syndrome 2.4 months after diagnosis.

“Future studies to explore the potential germline genetic predisposition for the development of hematologic neoplasms in the setting of [primary mediastinal germ cell tumors] are prospective,” the authors concluded. 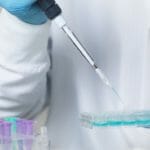