Researchers observed a 5.6-fold induction of HBG mRNA in the 20 mg dose cohort and a 6.2-fold HBG mRNA induction in the 30 mg cohort, the company said in a press release. They ascertained that FTX-6058 functions by significantly downregulating BCL11A and MYB, 2 main repressors of fetal hemoglobin (HbF). This finding indicates a potential functional cure for individuals with sickle cell disease (SCD).

Gerd Blobel, MD, PhD, chair of pediatric hematology at Children’s Hospital of Philadelphia in Pennsylvania, stated that “increasing the levels of fetal hemoglobin . . . can substantially reduce mortality and morbidity, and in cases where HbF reaches greater than 25-35% of total hemoglobin, lead to asymptomatic disease.”

Fulcrum President and CEO Bryan Stuart said the company “remain[s] on track to begin enrolling people with sickle cell disease in [its] Phase 1b trial by year-end, with an eye toward reporting initial data, including HbF protein levels, in the second quarter of next year.”

Researchers divided healthy volunteers into 2 cohorts: single-ascending dose (SAD) and multiple-ascending dose (MAD). In the SAD cohort, participants received 1 dose of placebo or 2, 4, 10, 20, 30, 40, or 60 mg of FTX-6058. Those in the MAD cohort received once-daily doses of either placebo or 2, 4, 10, 20, or 30 mg of FTX-6058. A separate cohort of individuals with SCD received a 6 mg dose of FTX-6058 to determine pharmacokinetics and pharmacodynamic modeling for dose selection in SCD patients enrolled in future trials.

FTX-6058 demonstrated a mean half-life of 6 to 7 hours in the MAD cohort, supporting once-daily dosing over a single dose. The investigators did not observe any food effects on the action of FTX-6058.

In the MAD cohort, FTX-6058 demonstrated significant target engagement, with a 75% to 95% reduction in H3K27me3 (a protein linked to gene silencing) from baseline levels after 14 days of treatment. Downregulation of BCL11A and MYB significantly correlated with both HBG mRNA and HbF induction, particularly when BCL11A expression was reduced >50%.

Most reported adverse effects were mild and resolved. Participants reported 2 serious adverse events, both of which were assessed as unrelated to FTX-6058. 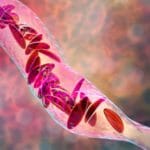