In children with sickle cell disease (SCD) and vaso-occlusive episodes (VOE) associated with pain, treatment with intranasal fentanyl has been linked with a greater likelihood of being discharged from the emergency department (ED), according to the results of a planned secondary analysis of a multicenter, cross-sectional study published in the American Journal of Hematology.

The researchers sought to evaluate the use and impact of intranasal fentanyl for the treatment of children with SCD-VOE. Their study was conducted at 19 academic pediatric EDs in the United States and 1 pediatric ED in Canada in 2015 and 2016. Fourteen of the EDs were part of the Pediatric Emergency Care Applied Research Network (PECARN). At these EDs, the annual volume of patients with SCD-VOE ranged from 80 to 700.

In an effort to include children with more severe forms of SCD, those with hemoglobin SS disease or hemoglobin Sβo thalassemia who presented for VOE and received treatment for pain were enrolled in the study. The patients were aged 3 to 21 years.

Intranasal fentanyl administered at a 50-mcg/mL dose was delivered via atomizer at a maximum of 1 mL to each nostril (maximum, 100 mcg). The primary study outcome was discharge to home from the ED.

A total of 400 patients participated in the study, 215 of whom were female. The median participant age was 14.6 years (range, 9.8-17.6 years). Overall, 367 of the patients had hemoglobin SS disease and 33 had hemoglobin Sβo thalassemia. The overall hospital admission rate was 67%, with the rates ranging from 45% to 90% across the sites.

“The rapid onset of action and ease of delivery without IV access offered by intranasal fentanyl make it a feasible initial parenteral analgesic [for] the treatment of children with [SCD] presenting with vaso-occlusive pain episodes in the acute-care setting,” the authors wrote. “Further study is needed to determine potential causality of the association between intranasal fentanyl and discharge from the ED observed in this multicenter study.” 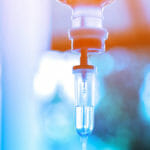