A one-off treatment with lovotibeglogene autotemcel (LentiGlobinTM) gene therapy leads to sustained production of the anti-sickling hemoglobin HbAT87Q in most red blood cells, resulting in less hemolysis and the complete resolution of severe vaso-occlusive events in patients with sickle cell disease. This is according to interim results from an ongoing phase 1/2 clinical trial.

Lovotibeglogene autotemcel, also known as lovo-cel, consists of autologous hematopoietic stem cells and progenitor cells expressing a modified HBB gene, which codes for HbAT87Q transplanted back into the patient’s body.

The phase 1/2 trial is a nonrandomized, open-label, multisite, single-dose study in adults and adolescents with severe sickle cell disease. The primary outcome measure is the proportion of patients achieving complete resolution of severe vaso-occlusive events between 6 and 18 months after infusion.

In the present study, published in The New England Journal of Medicine, researchers report results obtained from a group of 35 patients with severe hemophilia who had at least 4 vaso-occlusive events in the 24 months prior to enrollment.

According to these results, engraftment occurred in all patients and the median total hemoglobin levels increased from 8.5 g/dL at baseline to at least 11g/dL between 6 and 36 months post-infusion. Almost half (40%) of the total hemoglobin consisted of HbAT87Q and was distributed across a mean of 85% of red blood cells. The results also showed that markers of hemolysis were reduced following treatment.

In all patients who could be evaluated (25 patients), severe vaso-occlusive events were resolved. These patients had between 2 and 14 events per year in the 2 years before enrollment in the study. Three patients had a nonserious adverse event that was related or possibly related to the treatment but resolved within 1 week. The researchers reported there were no cases of hematologic cancer during up to 37.6 months of follow-up.

The trial is ongoing and is expected to be completed in February 2024. 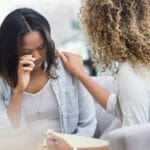 Caregivers of Patients With SCD Face Barriers to Care