Researchers described a patient with late-onset Pompe disease (LOPD) who presented solely with tongue muscle weakness, as published in Case Reports in Neurology.

Patients with LOPD usually experience slow and progressive muscle weakness, most notably in the proximal, trunk, and respiratory muscles. This is in contrast to infantile-onset Pompe disease, in which patients tend to rapidly develop respiratory and cardiac failure, resulting in death.

Recent studies have recognized the heterogenous presentation of patients with LOPD. Al-Hashel and Ismail presented the case report of a patient whose sole initial presentation of LOPD was the isolated involvement of the tongue muscles.

The patient continued to experience deterioration in his tongue muscles and noticed difficulties in smooth tongue movement. He was referred to a neurologist and was diagnosed with motor neuron disease. The patient was reluctant to accept the diagnosis and was thus referred to the authors of the study for further management.

A follow-up needle electromyography revealed denervation in the tongue muscles. Other tests were carried out, but “the picture was inconclusive, favoring a neurogenic rather than myopathic pattern and did not fulfill the diagnostic criteria for motor neuron disease, so further investigations were warranted,” Al-Hashel and Ismail wrote.

Screening for LOPD was conducted, revealing low acid alpha-glucosidase (GAA) enzyme activity. Next-generation sequencing was conclusive of a pathogenic variant in GAA and the patient was diagnosed with LOPD and started on enzyme replacement therapy. After 6 months, the patient’s clinical condition became stable with no further progression of symptoms.

“This rare report of isolated tongue weakness as the only initial manifestation of LOPD adds to the expanding phenotypic variability of this rare disease,” the authors concluded. “Clinical assessment of tongue strength can be useful in early diagnosis of this rare and treatable disease.” 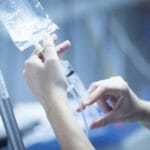 ERT Could Be Beneficial for Pregnant Patients With Pompe Disease