Implementation of a proteomic-based assay has been shown to reduce the rate of false-positive diagnoses and to shorten the turnaround time for the clinical follow-up in patients with severe Pompe disease (PD) and mucopolysaccharidosis type 1 (MPS 1), according to a new study published in Molecular Genetics and Metabolism.

Individuals with biochemical or genetic testing that was consistent with a diagnosis of PD or MPS 1 and their immediate family members (obligate carriers) were eligible for enrollment in the current study. Further, positive cases from newborn screening (NBS) were included as well.

False-positive cases were classified into 3 categories, based on genetic information: (1) carriers were defined as those with only 1 pathogenic variant; (2) pseudodeficiency was defined as those with at least 2 known pseudodeficiency alleles, and (3) false-positives were identified by the state NBS program and confirmed with the use of follow-up enzyme activity assay without genotype information.

Recognizing that the use of a fast turnaround assay would allow for the identification of severe cases of PD and MPS 1 that require immediate clinical follow-up and treatment, the investigators sought to develop a novel proteomics-based assay for the rapid, accurate second-tier screening of the patients with these diseases. They developed an immunocapture coupled with a mass spectrometry-based proteomics assay (Immuno-SRM) to quantify α-glucosidase (GAA) and α-iduronidase (IDUA) proteins in dried blood spots and buccal swabs.

PD and MPS 1 are autosomal recessive lysosomal storage diseases that are caused by pathogenic variants in the GAA and IDUA genes, respectively. In patients with these disorders, deficiency in GAA and IDSA is associated with the pathologic accumulation of glycogen or glycosaminoglycans within the lysosome, which leads to progressive multisystemic manifestations. The phenotypic classifications of the 2 diseases are not distinguished with the use of routine diagnostic tests, with considerable overlap reported in biochemical findings.

The initiation of interventions as early as possible in individuals with both of these conditions provides significantly improved patient outcomes. In those with infantile-onset PD (IOPD), enzyme replacement therapy and immune modulation in the first weeks of life are the current standards of treatment. In individuals with severe MPS 1, a bone marrow/stem cell transplant within the first few months of life is the standard of care.

Results of the current analysis showed that with the use of three 3.2-mm punches of dried blood spots, the assay demonstrated reproducible and sensitive quantification of GAA and IDUA proteins. Additionally, both of these proteins can be quantified in buccal swabs with high sensitivity and reproducibility. Patients with IOPD and those with severe MPS 1 can be identified easily because of the absence of GAA and IDUA, respectively.

“Direct quantification of endogenous GAA and IDUA peptides by Immuno-SRM can be used for second tier screening to rapidly identify severe PD and [MPS 1] patients with a turnaround time of <1 week,” the researchers said. 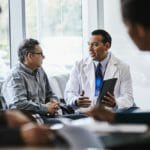