Genome editing could create a mouse model carrying the most common genetic variation of infantile-onset Pompe disease (PD) in an Asian population, according to a study recently published in Scientific Reports.

“It is an ideal model to assess innovative therapies to treat IOPD, including personalized therapeutic strategies that correct pathogenic variants, restore GAA activity and produce functional phenotypes,” the authors wrote.

This experimental study used an innovative single guide RNA (sgRNA) approach and CRISPR-Cas9 homology-directed repair to flank the target site for the production of a myoblast cell line with the GAA gene pathogenic c.1935C>A, or p.Asp645Glu variant. The researchers could also generate knock-in mouse models with the same mutation.

This genotypic variation is the most frequent among patients with infantile-onset PD in the population with Southern Han Chinese ancestry. This variant usually presents in the neonatal period with hypertrophic cardiomyopathy and severe muscle hypotonia leading to respiratory failure and infantile mortality.

Although the 3-month-old mice carrying this mutation did not experience early mortality, they did exhibit hypertrophic cardiomyopathy and deep skeletal muscle weakness, much like humans with this genotype, noted Kan and colleagues.

This study represents an important advance for future research regarding PD. Being such a genetically heterogeneous disease, performing experiments in mice with the exact mutation of the target population confers important advantages. 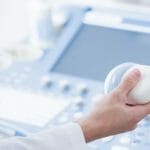 Ultrasounds May Be Useful in Patients With Pompe Disease