Developing new outcome measures to identify changes in muscle function among patients with neuromuscular diseases has not been productive to date. In this cross-sectional study, the researchers compared the gait features of a cohort of patients with LOPD and compared them with the gender and age-matched controls.

The research team used a new device called Ephion mobility, which consists of a set of commercial wearables interrelated to and within a platform that registers biomechanical data from the performance of a functional test.

The study included 18 people with LOPD, including 10 women with a genetic diagnosis of LOPD, and 27 controls. All patients with LOPD were symptomatic and had undergone treatment with enzyme replacement therapy. The enrolled patients in the study wore the sensors while performing the six-minute walk test (6MWT) and the 10-meter walk/run (10M).

Study results indicated that the distance walked in the 6MWT was considerably shorter for the LOPD group (423 ±103.5m) than the control group (655 ±140m). Significant differences in the gait pattern between the groups across kinematics, spatiotemporal, plantar pressure, and EMG signals were observed.

Moreover, those with LOPD showed an increase in the oscillation of the trunk and pelvis during the stance phase, which was associated with a longer extension of the knee during stance and an inversion of the foot. Furthermore, considerable differences between the muscle strength of the knee flexors and gluteus muscles were observed for both rest and walking conditions.

Additionally, elongated knee flexor and extensor co-contraction while walking were observed in the LOPD group compared to the control. The study also reported a decrease in the ground reaction force (GRF) in the heel strike and an increase in the mid-stance, leading to the formation of a flattened GRF profile.

“The Ephion mobility device is an easy-to-use measurement to study different gait features,” the authors wrote. “We observed significant differences between the gait pattern of LOPD patients and controls in this cross-sectional study suggesting multiple potential outcome measurements to distinguish between these two populations. Longitudinal studies are needed to identify if these measurements can capture disease progression over time.” 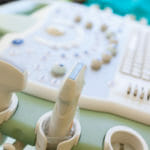