A 3D magnetic resonance imaging (MRI)-based machine learning algorithm is able to detect changes in the diaphragm of patients with Pompe disease, as evidenced in a study published in Magnetic Resonance.

“The increasing ratios in Pompe patients indicate an increased diaphragmatic curvature after 1 year. This corresponds to a more insufficient diaphragmatic contraction and may indicate progressive diaphragmatic dysfunction,” the study’s authors said.

During subgroup analysis, it was found that diaphragm curvature was significantly increased in nontreated patients with Pompe disease and patients who had been treated with enzyme replacement therapy (ERT) for greater than 3 years compared to healthy controls. The curvature was relatively stable in the healthy controls as well as patients who were undergoing ERT for 3 years or less. Similar results were observed for changes in the diaphragm area ratio.

“MRI potentially can be used to identify Pompe patients with still normal standard pulmonary function tests and only minor diaphragmatic abnormalities who might benefit from an early start of ERT,” the authors said.

A total of 30 patients with Pompe disease and 10 healthy controls were included in the study. No significant differences in age, sex, height, or weight were observed between the 2 groups. 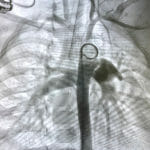