Elevated levels of enzymes related to glucose uptake and cytoplasmic glucose metabolism were observed in Pompe disease patient biopsies and in a mouse model of the disease, according to a study published in the Journal of Inherited Metabolic Disease.

In the study, levels of glycogenin (GYG1), glucose transporter 4 (GLUT4), glycogen-branching enzyme (GBE1), and UDP-glucose pyrophosphorylase (UGP2) were all found to be significantly upregulated in the mice, compared to wild-type (WT).

“Together our data show tissue-specific and temporal changes in glycogen synthesis that may result in accumulation of glycogen also in the cytoplasm in addition to the excess present in the lysosome,” the authors said.

UGP2 was strongly upregulated in the quadriceps femoris (QF) of Gaa-/- mice before the onset of muscle function loss, at 10 weeks of age, but this upregulation decreased as the disease progressed at 34 and 60 weeks of age. GYG1 was elevated at both 10 and 60 weeks and increased with age in both WT and knockout mice. The glycogen synthase (GS) isoform expressed in skeletal muscle (GYS1) and GLUT4 were both upregulated at 60 weeks.

All patients also showed improvement or stabilization of muscle function after treatment with ERT. These changes were observed through the recovery of cross-striation, a decrease in periodic acid Schiff (PAS) staining intensity, and improvements in Medical Research Council (MRC) and hand-held dynamometer (HHD) sum-scores.

A total of 5 Pompe disease patients (aged 35-69 years) and 5 healthy controls (aged 68-81 years) were recruited for the trial. Muscle biopsies were collected from the vastus lateralis of the participants using a standard open surgery or needle biopsy procedure. All of the Pompe patients were carriers of the c.32-13T>G (IVS1) variant on one allele with another disease-causing variant on the other. 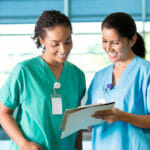