Combined testing with biochemical and genetic analysis can reliably identify infantile-onset Pompe disease, according to the results of a new study published in Molecular Genetics and Metabolism and presented at the 18th Annual WORLDSymposium 2022.

“This can significantly accelerate diagnosis in critical cases of small babies,” the authors said. “A genotype-phenotype correlation for several GAA variants could be drawn from the data obtained.” With this approach, they identified new genetic variants that contribute to the spectrum of pathogenic GAA variants.

The disease can be diagnosed by measuring acid alpha-glucosidase activity in dried blood in patients with increased levels of serum creatine kinase, limb-girdle muscle weakness, or respiratory insufficiency.

In the first step, the researchers biochemically measured acid alpha-glucosidase activity and in the second they sequenced the GAA gene in biochemically conspicuous cases. This way, the team was able to identify patients with Pompe disease at a very early stage.

“The results have shown that infantile cases with undetectable GAA enzyme activity were confirmed with at least two GAA genetic variants,” they wrote.

They added that samples with an acid alpha-glucosidase enzyme activities between 0 and 0.5 μmol/L/h were genetically confirmed as early-onset Pompe disease. Finally, they were able to successfully analyze cases of symptomatic late-onset Pompe disease. 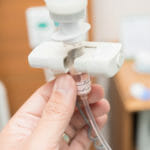 Home-Infused Avalglucosidase Alfa Could Be Safe in Pompe Disease