US researchers have reported that cardiac hypertrophy and a history of dysrhythmia are characteristic features of pediatric Pompe disease, according to a study published in Cardiology in the Young. They also identified enzyme replacement therapy (ERT) as a powerful tool to alleviate cardiac abnormalities in childhood Pompe disease.

Pompe disease is an autosomal recessive disorder that can cause complications in the heart, lungs, and muscles. The presence of cardiac disease is one of its most important features and can lead to an early diagnosis. In infantile-onset Pompe disease, cardiomyopathy typically occurs within the first year of age, and can lead to life-threatening complications if left untreated.

The main objective of this study was to publish cardiac-related findings to guide and improve care in pediatric patients with Pompe disease. The researchers used data from the ADVANCE study (NCT01526785), which investigated the effects of alglucosidase alfa in 113 American children with Pompe disease when the dose was increased from 160 L pre-study to 4000 L.

The researchers discovered several cardiac-related findings through the ADVANCE study. In patients that had dysrhythmias, most of them were discovered prior to the study, with Wolff-Parkinson-White syndrome being the most common cause. Of the 20 noncardiomyopathic ADVANCE patients with late-onset Pompe disease, 2 had cardiac arrhythmias or valvular abnormalities, which possibly developed independently of Pompe disease.

Electrocardiogram tests performed during the study demonstrated that 34 patients had shortened PR intervals (adjusted for age); however, these were not clinically significant. The monitoring of PR intervals in patients with Pompe disease is important because they can indicate the degree of conduction system glycogen accumulation. Early treatment with ERT supports the normalization of PR length, but persistently short PR intervals suggest that glycogen is accumulating beyond its rate of clearance from treatment.

Researchers also found that most of the patients with infantile-onset Pompe disease had normal left ventricular mass z scores, suggesting that the pretreatment alglucosidase alfa dose of 160 L was effective or that the patients had the GAA genotype, which typically results in better clinical outcomes. Increasing the dose to 4000 L from 160 L for 52 weeks “maintained cardiac parameters, including fractional shortening, left ventricular posterior wall and septal end-diastolic thickness, and left ventricular mass z score,” according to the authors of the study. 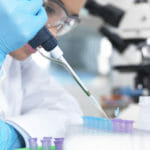