Researchers reported concerning intensive hemodynamic monitoring during cheiloplasty in an infant with Pompe disease, as published in Frontiers in Pediatrics.

A 4-month-old infant presented with a cleft lip and palate during the prenatal examination. She also had mild hypotonia without dysarthria or dysphagia, and occasional shortness of breath.

The X-ray revealed cardiomegaly, and her left ventricular mass index (LVMI) was 105.49 g/m2.7, which was higher than the 95th percentile for an infant under 6 months old. Acidic α-glucosidase (GAA) gene sequencing revealed 2 pathogenic heterozygous mutations, and cross-reactive immunological material status was positive.

With all the findings as detailed above, she was diagnosed with Pompe disease and started enzyme replacement therapy (ERT). The patient then underwent cardiac surgery, in which her patent ductus arteriosus and patent foramen ovale were closed. Her LVMI levels then decreased to 65.5 g/m2.7.

“After 3 months of follow-up, the patient was able to roll over, lie prone on the forearms, and reach out for objects, and she had a social smile. However, she could not maintain a sitting position unassisted, indicating slower development potentially than other infants of the same age,” Liu et al wrote.

Half a year after receiving ERT, the patient’s anti-GAA antibody became positive and she was started on hydrocortisone. The authors of the study ended the case report by writing that they will monitor her anti-GAA antibody status to see if additional immunosuppressants are needed. 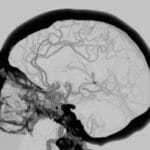