They identified a negative correlation between the enzymes that control the levels of Trx-1 and reduced glutathione (GSH) and functional parameters suggestive of pulmonary vascular resistance and myocardial effort.

Male rats were administered intraperitoneal injections of monocrotaline (MCT) 60 mg/kg. In 1 week, the authors of the study observed an increase in the expression of Trx-1 and vitamin D3 upregulated protein-1 (VDUP-1) in the thioredoxin reductase (TrxR) activity. In addition, an increase in TrxR activity and a decrease in glutathione reductase (GR) activity were found.

Two weeks after MCT injection, the animals still demonstrated VDUP-1 levels, an increase in protein kinase B (Akt) and cleaved caspase-3 activation, and a reduction in Trx-1 and erythroid nuclear factor 2 (Nrf2) expressions.

Similar observations were registered 3 weeks after MCT injections, with PAH induction leading to a reduction in Nrf2 and Trx-1 expressions, while it increased Akt and VDUP-1 expressions.

“In addition to being an antioxidant, thioredoxin (Trx) is known to stimulate signaling pathways involved in cell proliferation and to inhibit apoptosis,” Zimmer et al explained. The increase in pulmonary vascular resistance together with the upregulation of TrxR activity suggested an association between the thioredoxin system and PAH pathogenesis.

The authors acknowledged the limitations of this study, such as the MCT rodent model misrepresenting some of the features of human PAH. Therefore, further studies are needed to corroborate the findings. 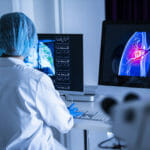