Researchers identified a new biallelic variant in the ATP13A3 gene that causes dose-dependent childhood-onset pulmonary arterial hypertension (PAH) associated with high morbidity and mortality. This finding has implications in terms of disease prognosis and treatment strategies.

The authors of the study, published in the Journal of Medical Genetics, stated, “Taken together, these findings demonstrate the growing importance of comprehensive genetic analyses in well-powered [childhood-onset] populations.”

To date, 26 genes have been shown to be associated with PAH, with heterozygous variants in the ATP13A3 gene recently identified as a cause of adult-onset PAH. However, the potential role of the risk allele in the childhood-onset form of the disease was unknown.

In the present study, a team of researchers led by Laura Southgate, MD, and Wendy Chung, MD, report the cases of 3 families with a novel form of childhood-onset PAH that was inherited in an autosomal recessive manner due to biallelic ATP13A3 variants.

Using genome sequencing of the parents and one of their affected children, the researchers identified a homozygous missense variant in 1 case. They then confirmed that the homozygous missense variant cosegregated with disease in an affected sibling. The researcher also identified compound heterozygous variants in the ATP13A3 gene independently in 2 affected siblings and in an unrelated family.

Upon close examination of the gene sequence, the researcher saw that the variants consisted of 2 frameshift mutations, 1 nonsense mutation, and 2 highly conserved missense substitutions, leading to loss of function in the protein.

The time of disease onset ranged from birth to 2.5 years, and the children did not respond to treatment. Four of them died in early childhood. All parents were heterozygous for the variants and had no symptoms of the disease.

The ATP13A3 gene encodes an ATPase enzyme that plays a role in the polyamine transport system. 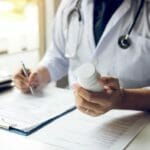