A study recently published in the International Journal of Clinical Practice suggests that direct bilirubin and N-terminal pro B-type natriuretic peptide (NT-proBNP) are each positively correlated with pulmonary vascular resistance (PVR) and, consequently, either could serve as a severity or mortality predictor for pulmonary artery hypertension (PAH) patients in the future.

The association between bilirubin and PAH is nothing new. A previous study in patients with PAH by the same authors stated that levels of direct bilirubin, but not general bilirubin, were much higher in nonsurvivors than in survivors, suggesting that direct bilirubin could be a valuable tool for predicting severity and overall patient outcomes in PAH.

Furthermore, the authors aimed to identify independent predictors of higher PVR in PAH patients after a multiple stepwise regression analysis, including blood gases, metabolic comorbidities, and patients’ medications. NT-proBNP was the only predictive factor of PVR elevation in the PAH group and made 18.7% variation clear (standardized β=0.433, P <.001).

The authors chose PVR for the correlation analysis because it predicts mortality and graft failure in patients receiving transplantation. Interestingly, although total and direct bilirubin were positively correlated with PVR, the only independent predictor of elevation was NT-proBNP, which warrants further investigations.

“Right [heart failure (HF)] was the leading cause of death of [patients with idiopathic PAH], and NT-proBNP is one of the most valuable biomarkers for diagnosing HF. Furthermore, a prior study has demonstrated a positive correlation between serum bilirubin concentration and lognormal concentration of BNP,” the authors wrote. “Therefore, it is not difficult to understand the positive correlation between bilirubin and the independent predicted value of NT-proBNP to the elevation of PVR in the IPAH group.” 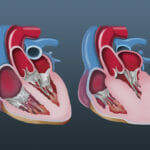 Blockade of mGluR5 May Yield Beneficial Effects in PAH