Recent data suggest that on-demand treatment with a single oral dose of the plasma kallikrein inhibitor sebetralstat in patients with hereditary angioedema (HAE) could rapidly halt disease attacks, according to a study published Xenobiotica.

Individuals with types 1 and 2 HAE have abnormalities in the SERPING1 gene, which in turn leads to C1 inhibitor (C1-INH) deficiency. Decreased C1-inhibitor is linked to dysregulation of plasma kallikrein, along with increased generation of bradykinin, edema, and vascular permeability.

To date, HAE guidelines recommend that patients with the disorder should always have access to medications for on-demand treatment of attacks. Currently available on-demand therapies for HAE require subcutaneous or intravenous administration, thus a creating a significant treatment burden.

Recognizing that the development of an oral, rapid-acting, well-tolerated, on-demand treatment for patients with HAE remains an unmet need, the investigators sought to evaluate the absorption, metabolism, and excretion of sebetralstat following a single oral administration of a 600 mg dose in 6 healthy human participants.

Plasma concentrations of sebetralstat, along with levels of total radioactivity in plasma, urine, and feces, were established. Metabolite profiles of radioactivity were generated, with major metabolites being characterized structurally.

Results of the phase 1, open-label, single-dose pharmacokinetic study showed that in plasma, [14C]-sebetralstat was absorbed rapidly in the systemic circulation, with a median time to maximum observed concentration of 0.5 hours. The geometric mean sebetralstat maximum observed concentration was 5890 ng/mL. The geometric mean apparent terminal elimination half-life was 5.79 hours.

Radioactivity was absorbed rapidly and was excreted with a mean of 95.8% (63.4% in feces and 32.4% in urine) recovered by 216 hours. Although sebetralstat was the main drug-related component in both urine and feces, metabolism predominated overall (major metabolites: M19, M10, M3, and M34).

Based on these findings and the lack of pharmacologic activity of M19, no unique or disproportionate circulating metabolite was reported in humans. Favorable tolerability was observed in this single-dose pharmacokinetic trial, with 1 mild event of diarrhea reported. 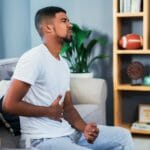 Recurrent Abdominal Pain in HAE Type 2: Clue to a Diagnosis