Retinal structural damage was observed in neuromyelitis optica spectrum disorder (NMOSD) and multiple sclerosis (MS) patients with demyelinating transverse myelitis (TM) but without optic neuritis (ON) in a study published in Neurological Sciences.

The mean retinal nerve fiber layer (RNFL) and ganglion cell-inner plexiform layer (GCIPL) thicknesses were significantly lower compared to healthy controls even while visual function was well preserved. Patients with myelin oligodendrocyte glycoprotein-associated disease (MOGAD) also had a significant reduction in RNFL—but not GCIPL, which is more sensitive to subtle changes in thickness—compared to healthy controls.

The lack of GCIPL thinning in MOGAD patients indicates that no structural damage had occurred in this patient group. The difference in RNFL thickness may have been due to the small sample size of the MOGAD patient group, according to the authors.

The myelin oligodendrocyte glycoprotein (MOG) is not present in the human retina while the aquaporin-4 (AQP4) channels are highly expressed in the Müller-cells of the inner retina, which may explain why damage was not apparent in MOGAD patients with TM compared to NMOSD patients with TM.

When comparing same disease patients with TM to those with ON, the RNFL and GCIPL were thinner in patients with ON. Visual acuity and mean deviation were worse in NMOSD patients with ON compared to TM but no difference was observed between the ON and TM groups for MOGAD and MS patients. 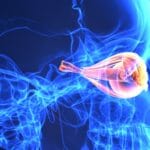