Exposure to maternal aquaporin-4 (AQP4) antibodies while still in the uterus could affect the development of the blood-brain barrier and change certain brain cells in the fetus, a new study published in Science Translational Medicine found.

However, this is only the case for male offspring, the authors said. Recognizing the presence of AQP4 antibodies could help improve diagnosis and treatment as well as pregnancy outcomes.

“This is another example of how maternal antibodies can affect brain development resulting in serious, life-long cognitive effects,” said Lior Brimberg, PhD, co-lead author of the study. “Through this work, we have a better molecular understanding of the risks in fetal development and how we might be able to prevent the neurodevelopmental consequences following exposure to anti-AQP4 antibody.”

AQP4 antibodies are a sensitive and highly specific serum marker of neuromyelitis optica spectrum disorder (NMOSD). They bind to AQP4, which is the main water channel in the brain providing water transportation across cell membranes. Their possible effect on the developing brain has not been studied so far.

Here, a team of researchers led by Betty Diamond, MD, Director of the Institute of Molecular Medicine & Maureen at Feinstein Institutes for Medical Research in Manhasset, New York studied the effect of exposure to AQP4 antibodies in the prenatal brain using a mouse model.

They found that male, but not female animals, exposed to AQP4-immunoglobulin G in utero developed abnormal brain vasculature and impaired blood-brain barrier. When they grew to adulthood, the mice had neuronal and astrocytic abnormalities and cognitive impairments. This, the authors concluded, suggests that maternal AQP4-immunoglobulin G might impair brain development in the offspring.

“We now learned that exposure in utero to AQP4 antibodies at a critical time may lead to long-term complications in the offspring, which we have yet to understand in humans,” Simone Mader, PhD, said. “This is a building block for future clinical studies to assess at-risk pregnancies.”

The researchers now want to assess children who were born to mothers with NMOSD to see any effects of AQP4 antibodies in their brains. 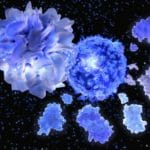