Variation in the platelet-derived growth factor B (PDGFB) gene may contribute to the pathogenesis of both neuromyelitis optic spectrum disorder (NMOSD) and primary familial brain calcification (PFBC), according to a case study published in eNeurologicalSci.

Researchers described a rare case of comorbid NMOSD and PFBC in a 43-year-old man from Japan. Due to his family history, he was diagnosed first with PFBC aged 14 years. Later, he developed NMOSD symptoms, including left and then right retrobulbar optic neuritis in his 30s and cervical and thoracic myelitis in his 40s.

Upon diagnostic testing, the patient was seronegative for both aquaporin-4 (AQP4) and myelin oligodendrocyte glycoprotein (MOG) autoantibodies. Additionally, he lacked oligoclonal bands in his cerebrospinal fluid and the mitochondrial DNA mutation, m.3243 A>G. The mitochondrial mutation could contribute to both optic neuropathy and brain calcifications.

Genetic testing revealed that the patient, as well as his mother and brother (both also diagnosed with PFBC), all had a point mutation in exon 5 of the PDGFB gene, causing their PFBC. PDGFB gene mutation causes PDGFB protein deficiency which in turn results in dysfunctional pericyte mobilization. Pericytes normally promote endothelial cell formation of tight junctions in the blood-brain barrier (BBB)., and increased permeability due to the disrupted BBB allows for the entrance of plasma proteins and minerals into the brain, resulting in brain calcification.

In previously performed pericyte-knockout murine studies, AQP4 distribution among astrocytes differed from the norm. Patients with NMOSD typically demonstrate AQP4 autoantibody-associated astrocytopathy, therefore, the researchers in this study speculated that a common pathogenetic mechanism exists for NMOSD and PFBC, suggesting the PDGFB variant as the root cause for both.

“This finding suggests a novel approach to NMOSD,” the authors concluded. “It means that in cases of double seronegative (anti-AQP4 antibody seronegative and anti-MOG antibody seronegative) NMOSD, PDGFB variant may affect AQP4 without antibody-mediated effects and may be involved in pathogenesis . . . especially in terms of BBB and pericyte dysfunction.” 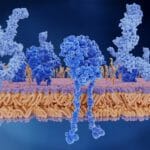