Surface texture differences of the medulla may be able to differentiate neuromyelitis optica spectrum disorder (NMOSD) from multiple sclerosis (MS) and other neurological diseases, according to a study published in the Journal of Neuroimaging.

Cross-sectional and longitudinal surface texture of the dorsal medulla were found to be different between patients with NMOSD and those with MS. Spatial differences were also observed.

Patients with NMOSD had a significantly higher (P <.0001) median number of inverted triangle counts (median, 100; interquartile range (IQR), 23.5) in a region of interest around the area postrema compared to those with MS (median, 65; IQR, 20.25) and other neurological diseases of the central nervous system (median, 66; IQR, 13.75). The introverted triangle counts represent a more complex and concave topography of the tissue.

A distinct spatial distribution pattern was also observed in patients with NMOSD compared to MS (P <.0001). The pattern of inverted triangles tended to extend more craniocaudally within the region of interest around the area postrema in the patients with NMOSD. Patients with MS were also found to be significantly different from patients with other neurological disorders of the CNS (P =.01). 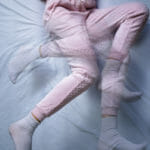