Medullary thyroid carcinoma (MTC) with an encapsulated tumor may correlate with the absence of nodal metastases and a better prognosis for patients, according to a study published in Frontiers in Endocrinology. The better prognosis was independent of RET or RAS gene mutational status.

A total of 15.9% (95% CI, 5.1%-26.7%) of tumors in the study were found to be encapsulated. None of these encapsulated MTC tumors (E-MTCs) were associated with distant or nodal metastases and the 7 patients with E-MTCs all achieved both structural and biochemical remission after resection surgery.

“The current research . . . provides support for the idea that tumor encapsulation may represent a valid tissue biomarker of node-negative MTC, even in the setting of focal full-thickness capsular invasion, and thus be predictive of a better prognosis, similar to what is well established in follicular-derived thyroid carcinomas,” the authors summarized.

“Primary tumor size was higher for E-MTCs than non-cured NE-MTCs, so neither serum Ctn nor tumor diameter were predictive of persistence of disease when tumor encapsulation was present,” the authors said.

A total of 44 MTC patients who underwent follow-up between January 2017 and January 2022 at a single clinical site were included in the study. The median age of thyroidectomy was 56 years. Preoperative Ctn levels were found to be correlated with the size of the tumors (P <.001) but not with the number of tumors (P =.109) among the full patient cohort.

Contarino A, Dolci A, Maggioni M, et al. Is encapsulated medullary thyroid carcinoma associated with a better prognosis? A case series and a review of the literature. Front Endocrinol. 2022;13. doi:10.3389/fendo.2022.866572 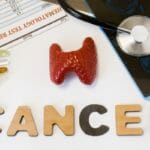