A rare case of a patient with multiple endocrine neoplasia type 2 (MEN2) with medullary thyroid carcinoma
(MTC) metastasizing to adrenal pheochromocytoma was reported in China.

“The similar neuroendocrine histological appearance of pheochromocytoma and MTC made the pathological diagnosis of a metastatic MTC difficult, especially when the metastatic foci was very limited,” said the authors of the report published in the Asian Journal of Surgery.

The patient, a 30-year-old male, underwent thyroidectomy after presenting with a suspicious mass in 2019. Histopathological analysis confirmed the diagnosis of MTC with C cell hyperplasia.

Microscopic evaluation of the specimen revealed classic morphological features of pheochromocytoma, as well as a small nest pattern of proliferative short spindle cells with clear to light-acidophilic cytoplasm.

Examining the Genetics of Sporadic and Familial Medullary Thyroid Carcinoma 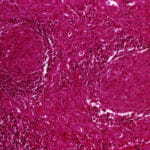 An Uncommon Coexistence of MTC With 2 Additional Thyroid Pathologies