Treatment patterns appear to be similar for medullary thyroid carcinoma (MTC) patients with and without REarranged during Transfection (RET) mutations, according to a poster presented at the European Society for Medical Oncology (ESMO) Congress 2021.

“Surgery and adjuvant [treatment] patterns were similar between [patients] with RET+ and RET– MTC, indicating a need for broader education among physicians on considering more tailored treatment approaches for each group,” the poster’s authors said.

Patient data were provided by 153 physicians for 275 MTC patients as part of the Adelphi Thyroid Cancer Disease Specific Programme between July and December of 2020. A total of 79 patients (42%) were identified as having mutations in the RET proto-oncogene, out of the 186 MTC patients tested for it. Among the patients with RET mutations, 28% had a family history of thyroid cancer in comparison to 1% of MTC patients without RET mutations. 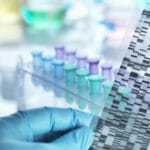