If diabetic ketoacidosis is found during routine ketone body tests performed as part of an autopsy, medullary thyroid carcinoma (MTC) should be considered as a possible cause of death, according to a case report by Korean scientists published in Forensic Science, Medicine and Pathology.

Ectopic Cushing syndrome, in which a tumor outside of the pituitary gland produces adrenocorticotropic hormone (ACTH), is found in only 0.7% of patients with MTC. However, if left untreated, ectopic Cushing syndrome can lead to death. Only a few autopsy cases of this condition exist in the literature.

Here, Harin Cheong from the Department of Forensic Medicine, College of Medicine, The Catholic University of Korea in Seoul and Hyun Lyoung Koo from the Forensic Medicine Investigation Division, Seoul Institute, National Forensic Service report the case of a 22-year-old woman with no previous medical history who was found dead by a friend. The cause of death was determined to be diabetic ketoacidosis associated with MTC.

This was based on the microscopic examination of the thyroid gland and kidneys, which revealed infiltrative MTC and subnuclear vacuolization of the desquamated tubular epithelial cells of the kidneys, the characteristic change observed in ketoacidosis. Moreover, clinicochemical analysis of the patient’s vitreous humor showed highly elevated glucose levels, and blood ketone body tests showed high β-hydroxybutyrate and acetone levels, confirming the cause of death as diabetic ketoacidosis.

“Considering all the information including tumor histology, dramatically elevated glucose and ketone levels, and with the exclusion of other possible conditions inducing Cushing syndrome, it was concluded that the woman died from [diabetic ketoacidosis], which was the complication of MTC-related Cushing syndrome,” the authors wrote.

They concluded that it is important for both forensic pathologists and clinicians to recognize that hypercortisolism can be the presenting symptom of MTC. 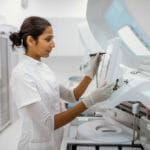 Procalcitonin Found to Be Accurate Diagnostic Biomarker for MTC