“The thyroid gland is highly vascularized; however, metastasis of tumors to the thyroid is relatively rare,” the authors stated, explaining that the breast, lung, and kidney are the common primary sites causing metastasis to the thyroid. “Metastasis to a thyroid neoplasm . . . is extremely rare with very few case reports in the literature.”

The authors reported the case of a 64-year-old female patient diagnosed with rectal adenocarcinoma in 2019, staged radiologically as T3 N1 M0. After immediate referral to the oncology team, she received a 5.5-week course of radiotherapy with capecitabine. The authors performed abdominoperineal resection of the primary rectal cancer in 2020, and it was staged as ypT1 N1b (2/16) M0 postoperatively.

Notably, during follow-up, carcinoembryonic antigen (CEA) levels were persistently high, which warranted further imaging studies. Whole-body computed tomography (CT) and positron emission tomography (PET)/CT identified a nodule in the thyroid gland alongside suspected lung metastasis due to a previously studied nodule that increased in size from 5 mm to 11 mm.

Although the patient had a known goiter for more than 10 years, the thyroid nodule increased in size from 2019 to 2021. Due to a high level of suspicion of MTC based on cytology and calcitonin immunostain positivity following ultrasound and fine needle aspiration of the nodule, the patient underwent thyroidectomy, and it revealed a metastasis from rectal adenocarcinoma within an MTC.

“The histopathology of the thyroidectomy specimen revealed a solid and partly necrotic tumor. This confirmed the cytological diagnosis of MTC,” the authors wrote. “However, within the main primary tumor, there was a necrotic metastatic adenocarcinoma. The MTC stained positive for calcitonin, whereas the metastatic rectal adenocarcinoma within it was positive for CK20, CDX2 and negative for calcitonin.”

They concluded, “Based on these features, a diagnosis of tumor-to-tumor metastasis was made (metastatic rectal adenocarcinoma to primary MTC) seventeen months after primary diagnosis.” 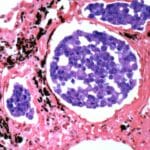