The study also found that using maximum intensity projection (MIP) on the 3D FLAIR images enabled faster and easier evaluation without a loss in the number of detected lesions.

“3D FLAIR sequences should be added to conventional 2D FLAIR sequences in the MRI protocol when MS is suspected as it provides better detection of MS lesions in all three planes in one acquisition,” the study’s authors suggested.

During the study, the supratentorial brain regions (juxtacortical, periventricular, and deep white matter) had the highest numbers of detected lesions on both 2D and 3D FLAIR. The 3D FLAIR detected a significantly higher (P <.001) number of lesions in all brain regions, however.

In the juxtacortical region, there was a 101.4% increase in the number of detected regions between 2D and 3D FLAIR (140 vs 282). The periventricular and deep white matter regions also showed significant increases in the numbers of detected lesions, however, they were more modest (28.7% and 33.3%, respectively).

Infratentorial lesions were detected in 48 out of 160 patients using 2D FLAIR but in 104 using 3D FLAIR. The 3D FLAIR detected 190% more individual lesions in this brain region than the 2D FLAIR.

Using 2mm reformatting, no difference was observed in the number of lesions detected between sagittal 3D FLAIR and axial MIP reconstructions. The results indicate that the use of MIP can help simplify lesion detection by reducing the number of images for analysis without a loss in reliability.

The authors suggested that the increased detection ability of the 3D FLAIR was mostly due to the 2D FLAIR being more prone to cerebrospinal fluid (CSF) and blood inflow artifacts while the 3D FLAIR was able to achieve a more homogenous level of CSF suppression.

One weakness of the study, as pointed out by the authors, was the use of 1.5 Tesla MRI machines which might have caused a larger difference in detected lesions between 2D and 3D FLAIR than might have occurred on a 3 Tesla machine. Another weakness was that the lesions detected on MRI were not able to be confirmed as actual MS lesions on pathology.

A total of 160 patients with MS were recruited for the study with ages ranging from 17 to 50 years old (mean, 33.4 years). The patients were predominantly female (n=142) and had relapsing-remitting MS (n=148). A total of 8 patients had secondary progressive MS and 4 had clinically isolated syndrome. 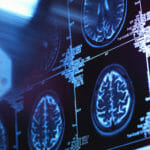