The ratio of aryl hydrocarbon receptor (AHR)-dependent transforming growth factor-alpha (TGF-α) over vascular endothelial growth factor B (VEGF-B) in serum is different based on the subtype, severity, and disease activity in multiple sclerosis (MS), a study by researchers in Germany found. It also correlates with the time of conversion from clinically isolated syndrome (CIS) to MS.

Serum levels of AHR, TGF-α, and VEGF-B can therefore be a novel biomarker to distinguish subtypes of MS and predict the severity and activity of the disease, according to the results of the study that was published in the journal Neurology Neuroimmunology & Neuroinflammation.

The AHR-dependent TGF-α/VEGF-B ratio regulates the effects of metabolic, dietary, and microbial factors on acute and chronic central nervous system (CNS) inflammation. Consequently, researchers hypothesized it could also be used as a potential biomarker in MS.

They found that the ratio of AHR-dependent TGF-α/VEGF-B a well as the agonistic activity of AHR were decreased in patients with a stable disease but increased during active CNS inflammation in CIS and during RRMS relapse. On the contrary, the AHR-dependent TGF-α/VEGF-B ratio and agonistic activity of AHR remained the same in patients with minimal clinical impairment despite longstanding disease.

The researchers also found that the TGF-α/VEGF-B ratio and AHR agonistic activity correlated with neurologic impairment and time to conversion from CIS to MS.

“It may thus represent a novel marker and serve as [an] additive guideline for immunomodulatory strategies in MS,” the researchers concluded. 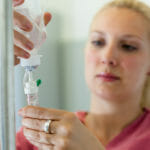 Home Infusion of Natalizumab Appears Promising for People With MS