Researchers have discovered an association between age and contrast-enhanced lesions (CELs) in patients with multiple sclerosis (MS), which they described in a study published in Neurology as a “general phenomenon across spectrums of MS disease courses.”

Because the severity of MS presentation varies according to the amount of nerve damage, it can be described in terms of a spectrum, ranging from mild to severe. In addition, MS can be classified as relapsing-remitting, and in cases where outcomes worsen, the rate of disease progression can vary greatly between patients.

Researchers aimed to uncover the association between age and CELs, as identified on cranial magnetic resonance imaging (MRI) scans, in patients with MS. Importantly, the researchers wanted to evaluate the association of these factors in different MS disease courses. To achieve this, they acquired data from 4 large randomized controlled trials. The trials and the baseline presence of CELs in them were:

The distribution of baseline CELs was found to be largely preserved within each age group. In all 4 trials, researchers observed that there was an almost linear decrease of patients with CELs as they progressed in age. In the ASCEND trial, CEL occurrence was almost absent after 1 year of experimental treatment. In the other 3 trials, the decrease of CEL occurrence with advancing age was preserved after 1 year of treatment.

Statistical analysis showed that among all factors, including baseline disease duration, sex, and the Expanded Disability Status Scale (EDSS), only age was significantly associated with the risk of CELs across all 4 trials; a higher age was associated with a lower risk of CEL occurrence.

The researchers of this study recommend that their findings be replicated in real-world MS datasets in future studies. 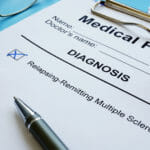 Ocrelizumab Effective After Suboptimal Response to Another MS Therapy