Researchers found that ethoxymethyl ether salvinorin B (EOM SalB), a salvinorin A analog, is effective in 2 different preclinical models of multiple sclerosis (MS), as published in Frontiers in Neurology.

This finding supports kappa opioid receptor agonists as being a promising therapeutic target for demyelinating diseases.

Salvinorin A is the main active psychotropic found in the plant Salvia divinorum. It is a neoclerodane diterpene that has potent and selective kappa opioid receptor agonist effects. Salvinorin A analogs like EOM SalB have the potential to be developed as antiaddiction and antinociceptive compounds. However, their effect in MS has not been assessed so far.

Here, a team of researchers led by Bronwyn M. Kivell, PhD, from Victoria University of Wellington in New Zealand investigated the potential of EOM SalB as a remyelinating therapy using 2 mouse models of demyelination.

In the first model of autoimmune encephalomyelitis, the researchers showed that EOM SalB was able to effectively decrease disease severity in a kappa opioid receptor-dependent manner. It also decreased the infiltration of immune cells and increased the levels of myelin in the brain and spinal cord.

In the second model of cuprizone-induced demyelination, EOM SalB was shown to increase the number of mature oligodendrocytes and myelinated axons as well as the thickness of the myelin in the corpus callosum.

The researchers concluded that kappa opioid receptor agonists like EOM SalB could be good candidates to be developed as potential treatments for demyelinating diseases like MS. More research is needed to further investigate the potential of this kind of treatment.

MS is an autoimmune demyelinating disease, symptoms of which include impaired motor control, spasticity, bladder and bowel issues, and cognitive dysfunctions. There are a number of disease-modifying therapies available for MS but there is still a need to develop more effective treatments. 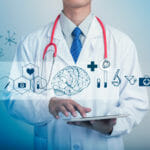 New Algorithm Could Predict MS Up to 5 Years Before Diagnosis