Researchers discovered that throughout the course of the administration of electroconvulsive therapy (ECT), no neurobiological signs of multiple sclerosis (MS) disease activations were detected, which may indicate clinical benefit as it led to an increase in the neuroprotective CCL-2 pathway in the participating patient, as published in the Journal of Psychiatric Research.

This study discussed the treatment difficulties of 2 neurological/psychological illnesses: MS, as well as depression and anxiety. A treatment strategy for both of these illnesses is ECT, which has been extensively studied. Essentially, scientists believe that ECT has anti-inflammatory properties that can improve the clinical picture of both diseases.

The authors described the case of a man with MS who was treated with ECT due to treatment-resistant severe bipolar depression. The patient was last admitted to the hospital due to severe and treatment-refractory depression. Several antidepressants and mood stabilizers failed to induce remission, and his physicians decided on ECT.

“The aim of our case study was to investigate the impact of ECT on immunological and neurodegeneration biomarkers and on the patient’s overall neurological condition in the context of MS and bipolar depression,” Kavakbasi and colleagues wrote.

They observed a partial response which corresponded to an improvement of around 35% in the Beck Depression Inventory and the Montgomery-Åsberg Depression Rating Scale. Both pre- and post-treatment, the concentration of inflammation and neurodegeneration biomarkers were low, and increases from pre- to post-ECT occurred mainly in the CCL-2 pathway.

“Investigation of inflammation markers, particularly CCL-2, is needed in non-MS [treatment-resistant depression] patients to be able to discriminate between the impact of ECT on inflammation in depression versus MS,” the authors concluded. 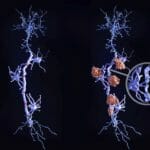