The study, published in Neural Regeneration Research, found significantly improved symptoms in the model mice compared to those of controls, as well as reduced percentages of CD4+ T cells and F4/80+ cells in the central nervous system (CNS).

“The present study revealed that Csn-B can attenuate the clinical severity of [experimental autoimmune encephalomyelitis (EAE)] with a potential therapeutic effect,” the authors wrote.

“First, we provided evidence that Csn-B suppressed Th1/Th17 differentiation of CD4+ T cells in vitro. Second, we demonstrated that Csn-B ameliorated the severity of EAE at the pathological level using an appropriate dose compared with that observed in the control group.”

For the experiments, the research team used 44 mice for EAE modeling and an additional 5 mice as sources of naïve CD4+ T cells. The EAE mice were administered Csn-B and controls were administered phosphate buffer saline (PBS), and symptoms and histopathology were assessed. In addition, naïve T cells treated with Csn-B or PBS were differentiated into Th1 or Th17 cells in vitro.

The results showed that Csn-B reduced the severity of EAE in the mice, as measured by reduced inflammatory cell infiltration and fewer demyelination lesions observed in the CNS. In the in vitro experiment, Csn-B significantly reduced Th1/Th17 differentiation of CD4+ T cells. In addition, CD4+ T cells and F4/80 cells in the CNS were reduced, as were proinflammatory Th1/Th17 cell responses and cytokine production.

The findings suggest that Csn-B effectively reduces inflammation and demyelination in an animal model of MS, and therefore it could represent a potential new therapy for EAE and a future candidate drug for patients with MS. 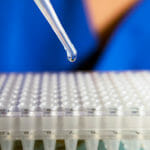