Real-world evidence supports the use of eculizumab (Soliris®) for the treatment of refractory, anti-acetylcholine receptor (AChR)-antibody (ab) positive myasthenia gravis (MG), as published in the Journal of Neurology, Neurosurgery, and Psychiatry.

Eculizumab excelled rituximab in the treatment of generalized, therapy-refractory anti-AChR-ab positive MG, according to findings from a new retrospective, observational multicentric analysis of patients from 6 university hospitals in Germany.

“Based on our data, a randomised, prospective trial comparing rituximab and eculizumab in the setting of severe, generalised MG is required to establish the most effective treatment strategy for this disease course,” the authors said.

Eculizumab-treated patients (n=20) had a better outcome than rituximab-treated patients (n=56) as measured by the change in the quantitative myasthenia gravis (QMG) score. The change from baseline QMG score after 12 months of therapy was 8.4 (SD 6.1) and 11.2 (SD 7.3) for eculizumab and rituximab, respectively. After 24 months of therapy, the change from baseline QMG score was 9.6 (SD 8.5) for eculizumab and 11.2 (SD 6.4) for rituximab.

Treatment initiation with either eculizumab or rituximab allowed the reduction of prednisone dose, but no significant differences were observed between groups. The number of patients who deteriorated during the 24-month observation period was lower in the eculizumab group (2 vs 9), but it did not meet the criteria for statistical significance.

Infection was the most common trigger of myasthenic crisis in both groups. Also, the use of rescue therapies did not differ significantly between treatment groups. Currently, both eculizumab and rituximab are treatment options for refractory MG after the failure of immunosuppressive standard therapies. 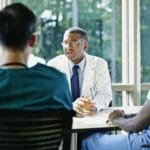