Patients who had repetitive nerve stimulation (RNS)-positivity, defined as a decrement of more than 10% on RNS at 3 Hz, and those with histotype B2/B3 thymoma were found to be at a higher risk of conversion. In contrast, patients who had thymic hyperplasia and stage I thymoma had a greater chance of complete stable remission (CSR).

“We revealed the impact of thymus pathology and thymoma anatomical features on prognosis of OMG after thymectomy,” the authors said. 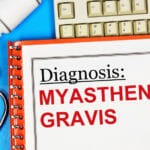 A Rare Case: Isolated Dysarthria as the Only Manifestation of Myasthenia Gravis