The use of immunosuppressive therapy (IST) in patients with myasthenia gravis (MG) does not appear to raise the risk of acquiring a SARS-CoV-2 infection, but may increase the risk of having a more serious infection, according to a study published in the Journal of Neurology.

When comparing patients with MG who were hospitalized or deceased with patients who were not hospitalized, those who had more serious infections tended to be older (68 years vs 53 years; standardized mean difference (SMD, .94), more often male (56% vs 33%; SMD, .47), have a higher Myasthenia Gravis Foundation of America classification score (SMD, .83), or more frequently receiving MG-related IST (84.4% vs 77.8%; SMD, .48), and had a higher prevalence of comorbidities (88% vs 73%; SMD, .37).

Multivariable binary logistic regression adjusted for age, sex, and comorbidities found that patients receiving first-line IST or escalation therapy with rituximab had a higher risk of hospitalization or death compared to those not receiving IST or only receiving corticosteroids (OR, 3.04; 95% CI, 1.02–9.06; P =.046). All deceased patients had at least 1 concomitant disease in addition to MG, and 9 of the 11 were receiving IST at the time of infection.

“This registry-based cohort study suggests that the current use of IST does not increase the risk of SARS-CoV-2 infection per se but, together with older age, worsens the prognosis of COVID-19-affected patients with MG,” the authors said. 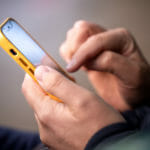 A Smartphone Application Could Assess Symptoms of MG